While Jenni Fagan and I are Outriders, traveling in the New World as part of the Edinburgh Bookfestival, in my hometown of Kalamazoo, Michigan, Outriders are a motorcycle gang. I used to hang out with a family called the Coles. Two of the kids (Karen and Ed) were in my grade at Comstock High School and their dad, Elmer Cole, had a long black beard rode with the Outriders. He died on my 16th birthday in a car accident, and the woman he was with (not his wife) swiped his wallet before leaving the scene of the accident. I remember that at his funeral the Outriders rode without their helmets, and it was a big deal, a long slow procession of un-helmeted dudes in beat-up denim and leather.

Now that we’ve done away with the helmet law in Michigan, that wouldn’t be such a big deal (Note: we’ve gotten rid of lots of regulations in Michigan. E.g., you can open carry your firearm anywhere in Michigan, including into a public elementary or high school.) 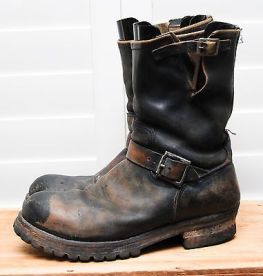 Now that I’ve gotten this far off topic—I meant to write about shoes—I’ll go ahead and fill in a couple of other things.  All three of the Cole kids were dead by about age 40, one from drugs, one from alcohol, and third, well, it wasn’t so clear, but maybe prescription drugs. This happened in some families around here, that they just burned out. The reason I brought up the Outriders was just a light-hearted note to refer to what kind of shoes they’d be wearing—surely you can imagine they’d wear beat-up boots. Also, though the Outriders are all men (or they were when I knew them), I like the idea of Jenni Fagan and I taking our next tour on motorcycles, and so I’m pasting in (above) some biker chicks. 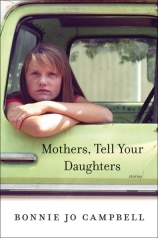 But Jenni Fagan and I are writers of the literary variety, and we are not yet biker chicks, so we moved by train, plane, automobile and bus, and so we were wearing rather ordinary shoes sufficient for a bit of walking. Because I’m an exercise nut, I had to bring running shoes, and so that meant I had room for only one other pair, and I figured I’d try out the very lightweight wool shoes, Allbirds.  Jenni had been meaning to get some new shoes for the trip, since hers were wearing out, but she was busy making a movie before she left and didn’t have a chance to get them before she left Scotland, and so she had only her well-worn sparkly black Converse All-Stars. She  figured America was as good as anywhere to pick up a new pair of Converse. 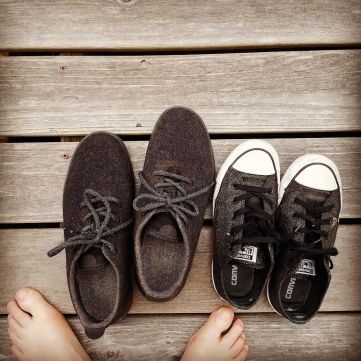 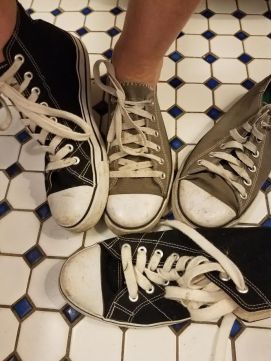 I suggested she could maybe get some new ones in Kalamazoo, but time ran out. What I really suggested was that we could go to Walmart and get the really cheap imitation all-stars, the Faded Glory brand (see in gray above); also available in Kalamazoo are the slightly better MTA brand that you can get at Meijers Thrifty Acres (see the black ones above). Jenni said she’d wait and get some real All-Stars. You might note that size-wise my shoes could carry Jenni’s shoes around inside them.

My darling Christopher says that if you don’t know what to talk about with a woman, just talk about her shoes. And while I’d like to say that isn’t true, it just might be true. Maybe the only thing really impressive about our shoe adventures is that Jenni never did get new shoes, and she kept wearing those Converses through New York City streets, through Motown, and all over the west coast of America, through giant redwood forests and cow pastures.  They absolutely should go into the Scottish Literary Museum or become a traveling exhibit that visits literary festivals along with her new movie short, filmed at Bangour Village Hospital (also known as Bangour District Asylum).

My Merino wool Allbirds (did they try to make them sound like All-Stars?) turned out to be perfect traveling shoes, not too hot or cold and breathable and never smelly, even when I wore them without socks—and they were comfortable without socks. I got the men’s version because the women’s don’t come in a large enough size. They were also okay for running the woods trail a half-mile back to the stony spot on the Smith River in the Jedidiah State where I left my phone next to the first cairn I’d ever built. (Sorry to keep you waiting, Jenni).  I was thrilled to realize cairn was a Scottish word.  Here’s a link to learn about the Allbirds: https://www.allbirds.com

Here’s the link to Jedidiah state park–I hope to post more about the redwoods soon.  http://www.parks.ca.gov/?page_id=413

Since we’re going on about shoes, I’ll show you my ugly running shoes.  Yes, they are an awful reddish color, but it is such a miracle when I can get good-fitting women’s running shoes for my size 12 pronated feet, and that is why I bought them and then took them on the trip.  And yes I did manage to exercise almost every day of our travels. You might notice that in the background of my shoe pictures, I’m showing some ceramic tile installations. I’m putting them in here for Jenni, who is a fixer-upper of houses as well as being the best novelist in Scotland. During her short stay in Kalamazoo, I forgot to show her my main bathroom floor (it is above with the fake All-Stars, white with blue), and my tile map of Michigan behind the woodstove is below (in blue and green). 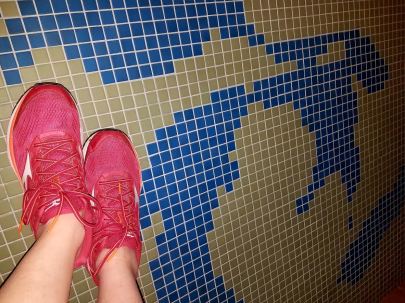 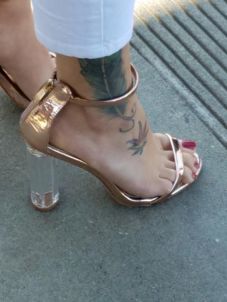 Some of the other remarkable shoes we saw on our journey included Emer Martin’s platform wingtip jazz shoes, which seem to enter a room before she does and stand their ground with no problem whatsoever. (Emer Martin is an Irish writer and artist who showed us around the Bay Area.) And before we boarded the train in Oakland, California, we saw a pregnant woman waiting for our train wearing these big lucite heels (above), just like real life Hollywood. Our trip organizer Karissy Kary (@KarissaKary) was stylish and light-footed all over Southern California in her thongs. Oh, and in Portland, Oregon, at the Pacific University Low Residency Program office, Assistant Director Jennifer Scanlon’s shoes were so pretty, so simply and elegant that I couldn’t keep my eyes off them. I’m enjoying posting the picture of Jennifer below, as she and I stand with with Ellen Michaelson and Alissa Hattman, two of my favorite former students! 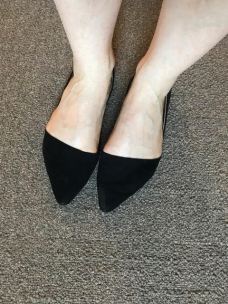 And let’s hear it one more time for Jenni Fagan’s shoes–this photo was taken on their last day in the USA!

For more info about the Outrider project, which has paired up Scottish and American writers to travel the New World, created by the Edinburgh Book Festival https://www.edbookfest.co.uk/the-festival/outriders

Read the other blogs entries from our trip on this blog, including the one about our meeting up with artist and author Emer Martin (@emermartin)  https://gorillagirladventures.wordpress.com/2017/05/31/ireland-joins-scotland-and-michigan-outriders-in-the-bay-area/

I'm the author of ONCE UPON A RIVER, AMERICAN SALVAGE, MOTHERS TELL YOUR DAUGHTERS, Q ROAD, WOMEN & OTHER ANIMALS. I love Michigan, donkeys, black walnuts, blackcap raspberries, Flannery O'Connor.
View all posts by bonniejocampbell →
This entry was posted in Uncategorized. Bookmark the permalink.

1 Response to Edinburgh Outriders: The Shoes!